Veterans have made great sacrifices for our country. They have protected and served the nation, yet many return home and struggle with poverty and economic insecurity. There are roughly 18 million veterans in the United States—many above the retirement age—and more than 1.2 million of them are living in poverty.

About 2.8 million Americans have served in uniform since 9/11, and an estimated 200,000 are unemployed, according to government numbers. Many veterans that find work are in the retail, security, manufacturing, warehousing, and the food and beverage industry, sectors which often pay minimum wage. When service members return from active duty, they’re more likely to face severe financial challenges than civilians. According to a recent survey carried out by the National Foundation for Credit Counseling, Vets are almost twice as likely to carry some credit card debt from month-to-month (58%) than civilians (34%). Even minor financial issues can spiral into bigger problems for veterans. Military veterans who report having relatively minor financial problems, such as bouncing a check or going over their credit limit, are four times more likely to become homeless within the next year than veterans without such problems, according to a survey of 1,000 Iraq and Afghanistan veterans published in the American Journal of Public Health last year. 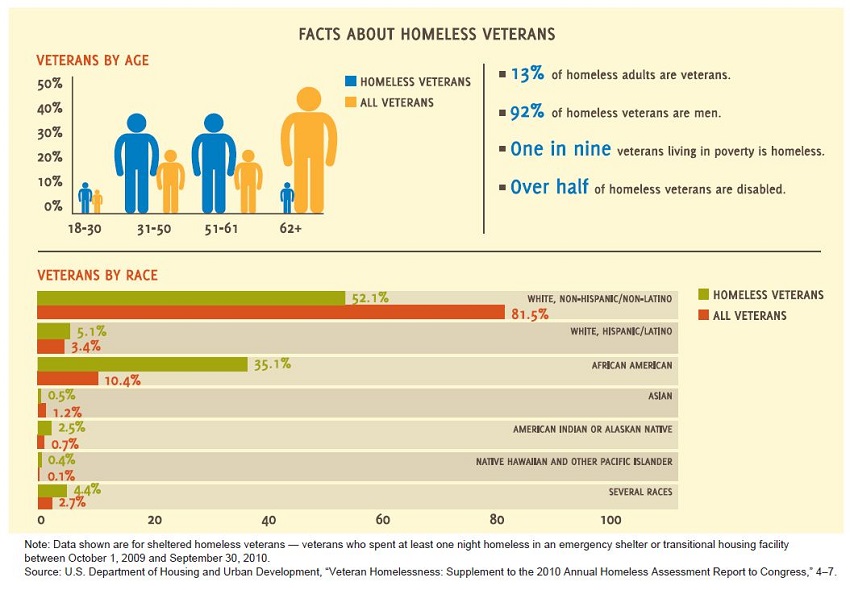 Post-traumatic stress disorder, known as PTSD, and substance abuse contribute to problems that lead to homelessness or risk of homelessness for veterans. Community-based groups and programs play a big role in returning vets to a normal lifestyle because government services are limited or at capacity. Money and resources from the government are also limited.