Wage theft is rampant in New York but exploitative employers too often hide or transfer their assets to avoid paying wages they have stolen from their employees. Even when workers win a court-awarded judgment, they are unlikely to collect money owed to them. In fact, there is more than $1 Billion of wage theft annually in New York State per a recent U.S. Department of Labor study. Much of this theft is never remedied due to loopholes that weaken our labor laws and judicial process. The victims of wage theft are often low-wage workers who struggle to support themselves and their families on meager wages despite long workweeks

The Wage Theft Prevention Act (WTPA) took effect on April 9, 2011. The law requires employers to give written notice of wage rates to each new hire.

The notice must include:

Currently, aggrieved employees who are often owed thousands of dollars in compensation, win their wages back in court, but have little to no ability to compel their employer to pay them. To counter Securing Wages Earned against Theft (SWEAT) bill (A628/S579) was introduced to close loopholes that hinder enforcement of state and federal wage theft protections. There is a growing group of grassroots organizations, workers centers, legal service providers and advocates fighting to ensure that New York’s workers are able to recover the wages they are owed by employers-The SWEAT coalition, of which we are proud to be part of. Hunger Action New York believes this is a bill whose core values are bipartisan, rewarding work, increases tax revenues generated when wages are paid, and saves taxpayer money by reducing reliance on public benefits. The SWEAT bill would change the civil court procedures to allow a judge to attach assets before a case has concluded if the workers can show they are likely to succeed. 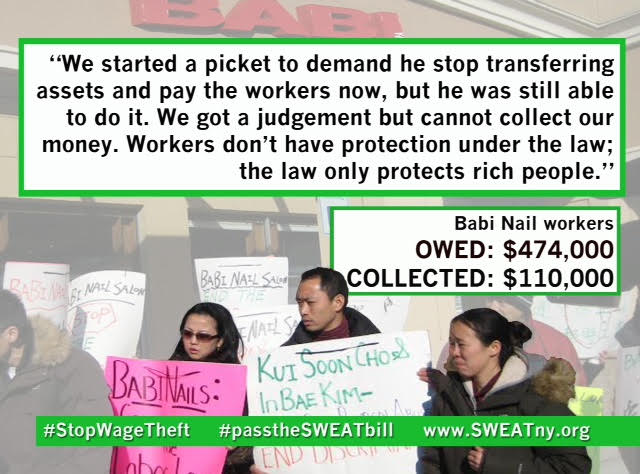 What is the SWEAT Bill?

The bill has three main components:

1. Expand New York’s mechanics’ lien law to include all workers – Establishes a “wage lien” so that workers can put a hold on employers’ property until their owed wages are paid. The measure would also create an alternative right of action by the DOL or NYS Attorney General to file a wage lien on behalf of claimants who they have determined are owed wages.

2. Hold employers’ assets before they run away – Allows workers to “attach” or hold an employer’s property prior to the resolution of a case that claims unpaid wages. 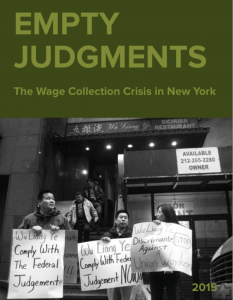 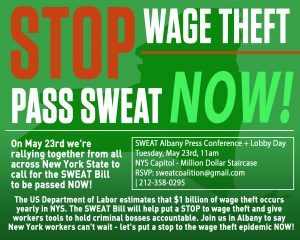 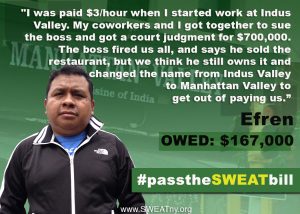