All across America, food banks are experiencing unprecedented demand. Families struggling to put food on the table during the COVID-19 pandemic are turning to food pantries, charities, and federal benefits as they endure the painful reality of hunger. Among those seeking help are military families who don’t know where their next meal will come from. Service members who have enlisted to fight for their country, already sacrificing so much, are struggling to feed themselves and their families.
This is not a new problem. Sadly, even before the COVID-19 pandemic and ensuing economic crisis, military families faced food insecurity. These currently serving members of the Armed Forces — often junior- enlisted service members (typically enlisted ranks E-1 through E-4) with multiple dependents — have turned in desperation to emergency assistance for years, surviving with the help of the food pantries that operate on or near every military installation in the United States.

Leading the effort to understand the scope of hunger, and solutions to address it, HANNYS supporter Mazon has found clear evidence of widespread reliance on food pantries and distribution programs on and near military bases; in fact there are food pantries operating on or near every single naval and marine base in the United States. Operation Homefront, an organization that offers financial and food assistance to service members, said that requests for food assistance have tripled since 2008.

The need is caused by various factors:

• Low salaries for enlisted members, high rates of unemployment for military spouses due to the transitorynature of the military, high cost of living near many military  bases across the country, and high costs of
childcare make affording enough to eat difficult.
• The self-sufficient culture in the military may serve as a deterrent to service members seekingassistance to which they are entitled.
• SNAP eligibility is treated differently for service members who live off base. The Basic Allowancefor Housing is included when calculating income to determine SNAP eligibility, making servicemembers ineligible..• Junior-enlisted members are more diverse in race, ethnicity, and gender than higher military ranks.They are also supporting families at much higher rates than previous cohorts of service members. ThePentagon has not adequately adjusted the base salary to reflect the reality of our modern military force.• The circumstances that give rise to food insecurity among military families are complex, yet simplisticresponses based on unfounded stereotypes are often lifted up ahead of more meaningful responses.• In the last year, COVID-19 has exacerbated the unique financial challenges of military families such ashigh rates of spousal unemployment, access to affordable childcare, and frequent relocation. 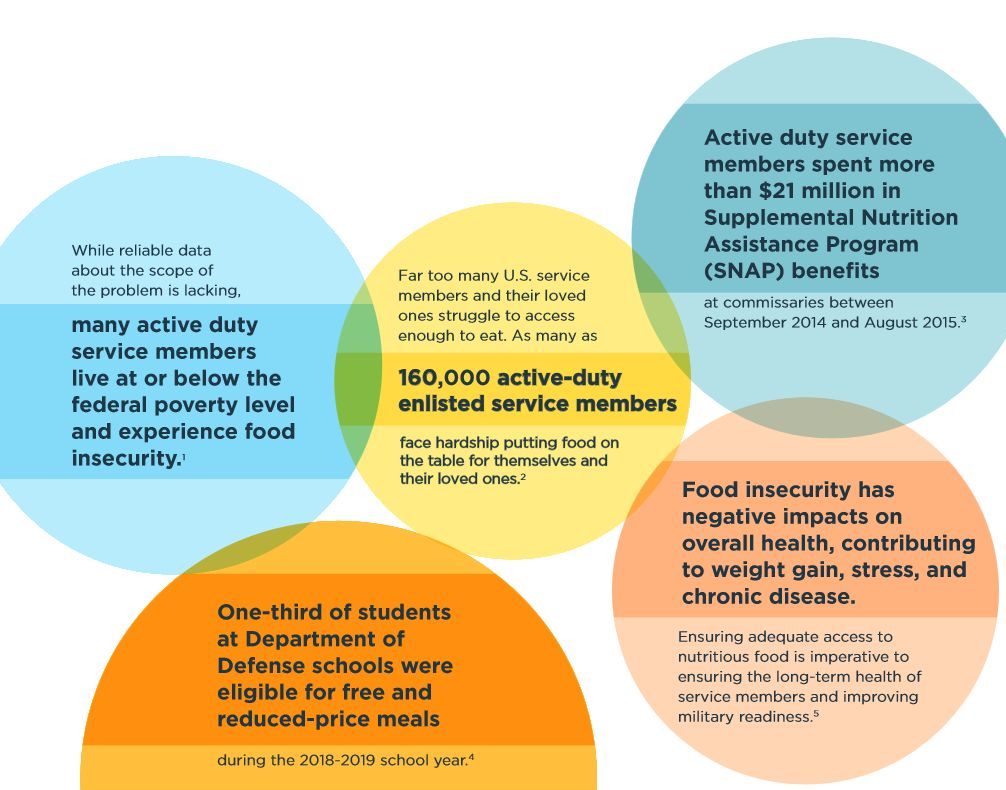 Veterans have made great sacrifices for our country. They have protected and served the nation, yet many return home and struggle with poverty and economic insecurity. There are roughly 22.5 million veterans in the United States—many above the retirement age—and more than 1.4 million of them are living in poverty.

Emerging evidence has shown that being food insecure is associated with poorer mental health and increased suicide risk. Although studies of the relationship between food insecurity and suicide risk factors are sparse, this is an important area for increased attention, especially among veterans.

Significant research has also shown a correlation between lacking regular access to food and poorly controlled hypertension, diabetes, HIV disease, and asthma, as well as a reduced ability to perform activities of daily living.

About 2.8 million Americans have served in uniform since 9/11, and an estimated 200,000 are unemployed, according to government numbers. Many veterans that find work are in the retail, security, manufacturing, warehousing, and the food and beverage industry, sectors which often pay minimum wage. When service members return from active duty, they’re more likely to face severe financial challenges than civilians. According to a recent survey carried out by the National Foundation for Credit Counseling, Vets are almost twice as likely to carry some credit card debt from month-to-month (58%) than civilians (34%). Even minor financial issues can spiral into bigger problems for veterans. Military veterans who report having relatively minor financial problems, such as bouncing a check or going over their credit limit, are four times more likely to become homeless within the next year than veterans without such problems, according to a survey of 1,000 Iraq and Afghanistan veterans published in the American Journal of Public Health last year.

Post-traumatic stress disorder, known as PTSD, and substance abuse contribute to problems that lead to homelessness or risk of homelessness for veterans. Community-based groups and programs play a big role in returning vets to a normal lifestyle because government services are limited or at capacity. Money and resources from the government are also limited.